Our Tour this year was unusual in that unlike other years, we remained in Cornwall, but at the extreme West of the county. We based our 'Land's End Peninsula Tour' on the well appointed and spectacularly positioned 'Lands End Hotel', where we had exclusive use over the nights of 28th and 29th April.

Our first stop was a lunch break at Trevaskis Farm near Connor Downs, where our MD Marcus and his family had arrived ahead of us, together with other members who were driving separately. And so our weekend began!

After arriving at the hotel and checking-in, we prepared ourselves for our first concert of the weekend at St Just, only 6 miles distance. The large and grand Methodist Chapel (or church depending on whom you ask) is known colloquially as the 'Miners Cathedral', due to the location of so many mines nearby, and has the very unusual feature of an oval balcony at its centre.

We had the great pleasure of joining Marazion Apollo Male Voice Choir for a wonderful evening of music including two joint songs under the baton of their MD Kate Wood-Cattran accompanied by Stella Pendrous, and two more under Marcus, accompanied by our own Accompanist Suzanne. The combined choir of 72 voices singing 'Gwahoddiad' and 'Hallelujah' certainly lifted the roof. 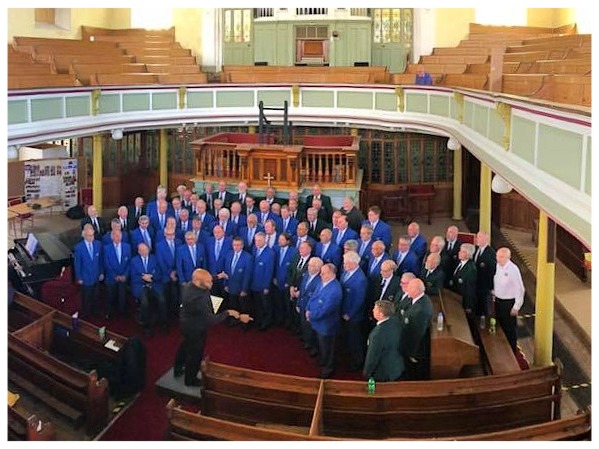 Retiring to the spacious 'Commercial' a short walk away, the evening continued in great spirit as we continued to sing our hearts out over a superb afterglow and Pasty supper. Many thanks to all at Marazion Apollo and the Chapel for looking after us and giving us such a warm welcome. We hope to meet you all again in the not too distant future.

After a leisurely breakfast, Sunday's itinerary began with a drive through Sennen Cove (too late to leave 'childish footsteps', or for that matter 'chase any young maids!'), and on to Geevor Tin Mine. Suitably protected with hard hats, we toured the mine buildings, and whilst still in the 'Dry', gave our rendition of 'Cornwall my Home'. Though on this occasion , the 'Sheave Wheels' were not in action and we could not observe them as they 'spun around', we did at least follow in the Miners footsteps by singing before we went 'underground' to get a mild taste of how difficult and hard a life it would have been for those men. Having closed in 1990, many of the facilities within this World Heritage Site are left untouched, you could still feel their presence, quite eerie!

Upon returning to Land's End via 'The First and Last Inn' for an appetizing Sunday Roast Lunch, we gathered for an informal sing in the complex, before preparing ourselves for the evening concert in Paul.

The venue for our second concert of the weekend, St Pol de Leon Church in Paul, serves the area from Newlyn to Mousehole, and houses the memorial to the crew of the Penlee Lifeboat 'Solomon Browne' which was tragically lost at sea in 1981. Our hosts for the joint concert, the Penzance Orpheus Ladies Choir, had invited us to arrive early for tea in the village hall, and what an amazing 'spread' they provided for us. Having become acquainted with the Ladies, and after practising two joint songs under our own musical team and Penzance MD Stephen Lawry with Accompanist Rebecca Mayall, we crossed the road to meet the large and welcoming audience.

After a great evening of varied and entertaining music, and not forgetting a recitation from the pen of local Poet David Prowse, delivered in his customary manner by Roger and clearly appreciated by all, we retired to the Kings Arms. Buoyed up by a couple of our best performances in recent times, we followed up with what many of us felt was one our best afterglow sessions, much to the pleasure of the Penzance Ladies, Locals, and Visitors alike. It was so difficult to drag ourselves away, but reluctantly we had to depart....thankfully our Driver Colin was parked 'impossibly' close by, and we were soon whisked back to Land's End. A heartfelt thanks to Stephen and all the Ladies and supporters of Marazion Orpheus for organising such a great evening which we hope we can repeat in the future.

Following a hearty breakfast, our final day began with a photo call at the famous 'Signpost' familiar to every visitor to Land's End. Though the wind was brisk and very chilly still for late April, we had been blessed with some beautiful sunshine throughout the weekend, and the day ahead was not going to break our luck. Our contingency plan for Falmouth was therefore thankfully not needed, and to everyone's joy, our much anticipated visit to the Minack Theatre would go ahead,

Because many in the Choir had not been to Minack before, let alone sung there, we had asked the management to allow us the stage for around 30 minutes at midday, to have an informal sing for our own pleasure. However the sunshine and this incredible landmark had attracted many visitors who listened from various points around the terraces. We had a great experience there, and at one point had some visitors shedding tears of emotion. The final masterstroke as we dispersed, was a spontaneous rendition of 'Cornwall My Home' struck up by Brian Crowle, which was a fantastic and fitting climax to the Tour.

After some lunch in Porthcurno, we were homeward bound, reflecting on a truly memorable time together......and wondering where we will venture next time! Dave Williams had done a magnificent job again. Organising these events is not for the faint-hearted, it takes a lot of time, hard work and patience to do it, and there are many anxious moments to overcome. So....a huge thanks Dave from all of us!

Thanks also to our brilliant musical team...Marcus and Suzanne, who I know had a whale of a time too....to our very own Colin Arthur and Roger James, our ebulient MC John Ead......and our Driver par excellence....Colin Hoare. We musn't forget The Land's End Hotel, which was a superb choice of location, very comfortable, and with friendly and welcoming staff.

Oh and a final thanks to our lovely mascots....Sophia, Izzy, and 'Little John' who was nowhere near as charming and well behaved as the girls!

One more thing, if you would like to be part of Loveny, to sing, or to support us, then please check out the information on this website, it will tell you who we are, what we do, and how to contact us....we'd love to hear from you.

Ps...quick link to our sing at Geevor, have a listen!

Sign of the times, couldn't have done this in 1971